The Spirit of Kerouac Festival 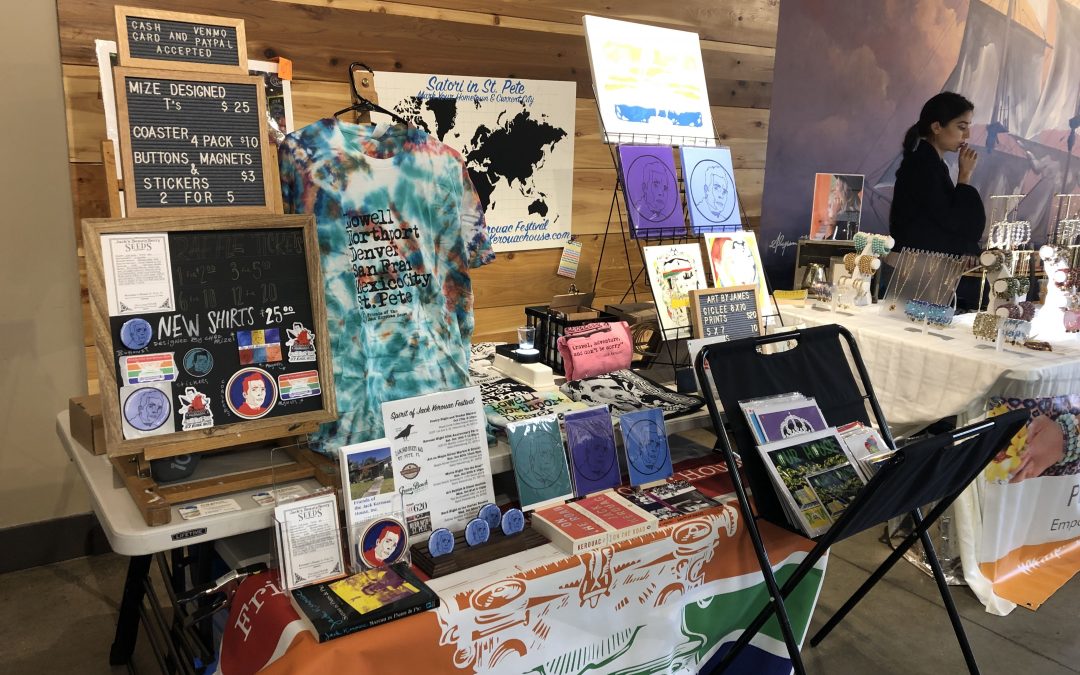 Recap of The Spirit of Kerouac Festival, a series of fundraising events Oct 10th-26th in 2019 honoring the 50th anniversary of Jack Kerouac’s passing in St. Petersburg, Florida on October 21st 1969.

Our first event was a vendor table on Thursday 10/10 with Preserve the ‘Burg’s “Movies in the Park” event.

On 10/17 we hosted a Poetry Open Mic Night and Vendor Market at Black Crow Coffee’s new Grand Central location from 6-10pm. Our organization handed out membership brochures and had a merchandise table with our new limited edition shirts designed by Chad Mize in four versions, tie-dye, black, white and heather grey.

Hungry on a Sunday morning? Join us at Art on Maple Street, a Vendor Market and Brunch Fundraiser with The Mars Collective hosted at Maple Street Biscuit Company St Pete from 10am-2pm on Oct 20th.

The night of Oct 20th we hosted a free admission, Officially Licensed Screening of the 2012 film “On The Road” directed by Walter Salles. The film adaptation of Kerouac’s famous novel was projected on the beer garden’s screen at Green Bench Brewing Co. 6:30-10pm. For the first time ever we had live screen printed shirts at our event by the talented local staff of Woveprint.co

Our next event was a Silent Auction and Art Exhibit at The Studio@620 on Oct 21st from 6-10pm highlighting the work of Clinton Inman along with other national and local artists. Featuring Live Music by Nancy Mizzle aka the Violin Chick, finger foods and baked goods, and a Q & A talk with our featured artist. Tickets were 7$ in advance 10$ at the door.

Wednesday Oct 23rd we gave a presentation along with a Q & A session at Nerd Night, the humorous and eclectic event hosted at the Subcentral Speakeasy within Iberian Rooster proving each month that geek is indeed chique.

Thank you to everyone who supported our charity fundraisers with social media love and physically attending. Thank you to all the local artists and businesses who contributed to the raffle prizes like Josh Comics, Revelore Press, Blue Bird Books, Wordier Than Thou, Wild Roots, Nautigirl Swimwear, Cycle Brewing, Zaytoon Grill and more!